Why did the Optimizer not choose an index?

I'm always learning about the optimizer (CBO) and enjoy opportunities to investigate to solve real-world problems presented to me. During a recent stress test of some BI (WebFOCUS) reports, I decided to look at the top SQL statement as reported by Quest's Foglight Performance Analysis Tops Report.

After cleaning the SQL up some, I had something that basically looked like:

After working with the SQL some, I found I could get the optimizer to utilize this index (via skip scan) by passing the hint:  /*+ INDEX_SS_DESC(T1) */ - which made sense: Period and Year were the last two columns.

So where to go from here? First I would like to point out that this is a static table, refreshed nightly and did not have stats on it. As a quick test to see if stats would help – it didn't change the plan to use the Index when used without the hint. It did remove the use of Dynamic Sampling (Level 2: 64 blocks) though.

Ok, what next? After reviewing our optimizer's init.ora settings:


I decided to explore the reasons why Oracle is not using the Index for Period and Year by first changing the value of OPTIMIZER_INDEX_COST_ADJ from 100 to 90.

Initially, a FTS is still performed as stated above. Then when OPTIMIZER_INDEX_COST_ADJ is changed from 100 to 90, it still uses a FTS. It is not until statistics is gathered that the optimizer now chooses the Index (Skip Scan) without any hint used. Also note that once stats are gathered, Dynamic Sampling goes away.

When this test was repeated the following work day, the value at which the Index was used was down from 90 to 87 so I looked into how to use this parameter.

Several trusted sites recommended not setting this at the instance level from the default value (100). I did find a way to calculate the value by using:

A single block I/O as performed typically by an index range scan is measured via the “db file sequential read” wait event while the multi-block I/O as typically performed during a FTS is measured via the “db file scattered read” wait event - suggesting a value of around 70 in this case. Rather than setting at the session or system level, I tried setting this for my query with the following hint:

which selected the Index as expected.

At this point, I would like to add that I suspect a possible issue with System Stats. Based on the scattered and sequential read times shown above, when I query: 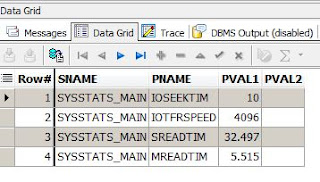 and observed values for SREADTIM = 32.497 and MREADTIM = 5.515 which would suggest the opposite - that it's 6x faster to read a multiblock than a single block?

When computed manually, these numbers should be closer to:

While setting a HINT will help make this particular query run much better, I suspect that the source of the problem is our System Stats.

Posted by Alteruser at 1:40 PM